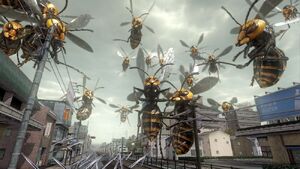 Born within a giant hive from a singular queen

The Hornets created by the Ravagers are an advanced form of aerial insect-like creature that was mutated in order to attack and invade on Earth. Their existence in part is thanks to the discontinued Wasps, which these are the advanced versions of.

Much like Terror Ants and Assault Spiders, the Hornets are mutated versions of their Earth counterparts. In this case, these are the mutated counterparts to the Japanese Giant Hornet. A prior form of these, known as Wasps, were in possibility the prototypes to the Hornets, as Wasps were discontinued prior to the Hornets' first known existence reports in 2025. Hornets are large, flying creatures with two sets of insect-like wings to give them flight. As they are based off of normal hornets, their instinct to work together means that they're almost always found in large swarms. This is possibly because they were given traits similar to immature Terror Ant queens (which can also fly).

Their stingers are given a specialized ability to shoot out, similar to that of darts and it can shoot multiple times. These darts explode into a barrage of acidic stingers upon getting closer to the ground due to the pressure. While they can shoot downward accurately, their aim upward is very limited.

Unlike their Wasp prototypes, which share home with Terror Ants in anthills, Hornets have their own gigantic hives they call home, made in a similar manor to any other hornet. All hornets, including queens, are from these hives and any threat to it will trigger the entire hive to attack.

Death Queens are the undisputed rulers of their hives. Similar to Queen Ants and possibly King Spiders, Death Queens are a much larger, deadlier form of their drones. They can grow to the size of a city block, but their size makes them much slower than their offspring, in both movement and their dart attacks.

Despite their slower speed, they are extremely lethal in power, some arguing that it is deadlier than the other rulers of the Assault Spiders and Terror Ants.

Red Hornets are a mutated variant of the normal Hornets. Behavior wise, they act the same way as their normal counterparts, but are bred more aggressively, and are tougher and stronger than normal Hornets.

Retrieved from "https://aliens.fandom.com/wiki/Hornet_(Earth_Defense_Force)?oldid=181788"
Community content is available under CC-BY-SA unless otherwise noted.