"[...] but the Horla will make of men what we have made of the horse and of the ox: his chattel, his slave and his food; by the mere of his will. Woe to us!"
―Guy de Maupassant, The Horla 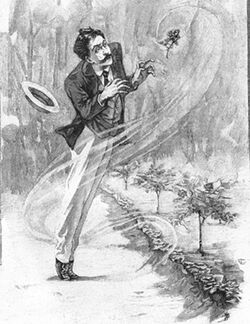 A man is astonished to see the invisible Horla picking up a flower from his garden.

When inside a host, influences the host to consume water and milk.
Also feeds on the host's life essence.

Guy de Maupassant
The Horla are invisible creatures believed to come from other worlds beyond the stars; which have traveled to Earth to become the next dominant species. Unreachable by human senses, they are however corporeal, and consume water and milk to survive, although never going anywhere near solid foods. They are able to enter human bodies and control them, giving orders that go against the host's will, even though the host remains conscious even under the parasite's mastery.

A Horla will invade its host during sleep, first causing physical symptoms such as fever, then psychological ones like insomnia and extreme anxiety. This is described as "feeding on the life essence" of the host, which leads to the belief that the Horla is partially parasitic; although its consumption of water and milk proves parasitism is not its only source of nourishment.

Based on what he learns about the Horla and their abilities, the protagonist of the story believes them to be a superior form of life, more resistant in their physical forms than humans, and thus impossible to be killed by traditional means. Whether this is true remains unconfirmed.

Retrieved from "https://aliens.fandom.com/wiki/Horla?oldid=181344"
Community content is available under CC-BY-SA unless otherwise noted.