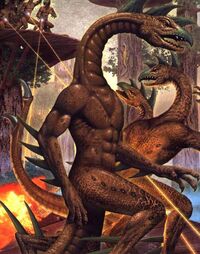 The Hork-Bajir are a reptilian race from K.A. Applegate's Animorphs series.

The Hork-Bajir are bipedal, have strong reptilian bodies with dark green-black leathery skin, and at least two hearts. They have snake-like necks with a sharp beak at the end of their heads, tyrannosaurus-like feet, three claw-tipped fingers and a thumb on each hand, and measure to a height of seven feet in adulthood. Their most notable feature is that they have huge, long blades all over their bodies: their elbows, wrists, feet, legs, head, and tail. Male and female Hork-Bajir are told apart by the number of blades on their heads; males have three blades while females have two. According to Jara Hamee, there is another difference, but claims that it's only for Hork-Bajir to know.

Although they look fierce, they're a race of pacifists. They never even understood the concept of violence or fighting until the Yeerks showed up. Their blades are used for stripping bark off the huge 100 to 1,300 foot trees on their homeworld. In fact, there was a lot they didn't understand, since their Their intelligence is equivalant to that of a human toddler. Although, some suspect that they may simply be intelligent in different ways that they don't show. They can't see well in the dark, but they do have an excellent sense of hearing and smell. Their blood appears in shades of deep red and deeper blue-green. They also can stand a lot of pain and heal quickly.

The seers are much more intelligent than their brothers and sisters and in times of trouble, the other Hork-Bajir may look to them to lead.mental capabilities don't really measure up to those of most other races.The Hork-Bajir homeworld was the first world the Yeerks reached out to for conquest. When they first saw them, the Yeerks thought the Hork-Bajir were huge warriors, not peaceful, gentle bark eaters. So they enslaved them to become fierce soldiers. The remaining free Hork-Bajir were destroyed by the Quantum Virus, which War-Prince Alloran-Semitur-Corrass had programmed to kill all Hork-Bajir--Controllers as well as the free Hork-Bajir still alive on the planet-- to prevent them from becoming enslaved. In The Hork-Bajir Chronicles, a young Hork-Bajir seer named Dak Hamee befriended an Andalite  named Aldrea-Iskillion-Falan during the Hork-Bajir war. Aldrea morphed and became a Hork-Bajir nothlit, and the two later married. They had a son Aldrea named Seerow (after her father). Her great-granddaughter, Toby Hamee is also a seer.

The Hork-Bajir are used throughout the series against the Animorphs as Yeerk foot soldiers. In Animorphs 13: The Change, with the interference of the Ellimist, Tobias and the other Animorphs help a Hork-Bajir couple named Jara Hamee and Ket Halpak escape the Yeerk Pool and establish a colony for free Hork-Bajir in a hidden valley deep in the forest that was created by the Ellimist. Throughout the series Jara and Ket continue to help other Hork-Bajir to freedom. By the end of the series, they became a free species, establishing a new home, protected by the American government, on Earth.

Retrieved from "https://aliens.fandom.com/wiki/Hork-Bajir?oldid=160856"
Community content is available under CC-BY-SA unless otherwise noted.