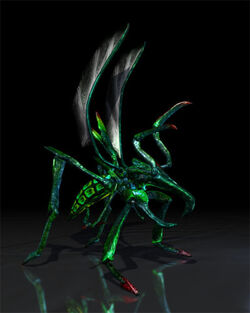 Hopper Bugs are a morphological caste of the Arachnid Empire. Green in coloring and similar in overall physiological design to the Warrior caste, they have adapted a set of four, jagged, insectoid wings that lay across their backs; these give them the capability of short range gliding and high altitude. This is because the wings have barely enough muscle tissue controlling them to provide lift to a suitable height and not so much for prolonged flight. Once at the suitable height (such as a cliff face) for gliding purposes, they set their wings rigid before charging off the edge and leaping into the air. While airborne, they can gain altitude by angling their wings similar to a plane, while they can jump as high as 50 meters into the air to aid them in getting off the ground.

They are notorious for either decapitating foes as they glide past or piercing them with their stinger which emerges from the abdomen. However, a morphological offshoot of the Hoppers, known as the Rippler Bugs, were discovered to be capable of firing their stingers, which in turn were filled with a corrosive toxin. Four limbs extend from their bodies to remain in contact with the ground for movement, while another two have been adapted into vicious scythes; they also possess very thick hides that are relatively difficult to puncture.

The Hopper strain were first discovered during a campaign to rid the dwarf planet Pluto of the Arachnid menace. While a Human group known as Alpha Team succeeded in destroying the first wave of Hoppers, a larger force emerged, proving that they were not neutralized. It has been assumed that the Hopper eggs were transplanted on the dwarf planet by a Transport Bug.

Retrieved from "https://aliens.fandom.com/wiki/Hopper_Bug?oldid=192539"
Community content is available under CC-BY-SA unless otherwise noted.