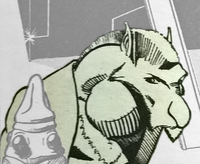 Those Hoon in Galactic culture are respected and feared bureaucrats in the service of many Institutions, and mortal enemies of the rather pro-natalist and dynamic Urs. Hoon have a reputation for being sober, impeccably proper, and insufferably officious. Hoon, in their capacity as incorruptible bureaucrats working for the Institute of Migration, authorized the "depopulation" of the Human colony world of NuDawn in the first decade of Terra's encounter with Galactic civilization. They refused to accept ignorance of Tradition as a mitigating factor, and refused to exercise any discretionary power to grant pleas for mercy; this, despite the fact that these imperious bureaucrats readily admitted that the laws they had to apply in this particular case were unjust. The massacre of the colonists was carried out with astounding efficiency and a minimum of terror or pain. Such Hoon forces as participated in the "Extermination of Illegal Settler Infestations" displayed neither pleasure nor remorse. They were simply professionally efficient.

Terragen-Hoon relations can be described as -- at best -- cordial and correct and Terragen policy is to diplomatically back the Urs in any confrontation with Hoon.

They are known as seafarers and as musicians who are able to make musical tones with their throat sacs, “umbling”.

Found by the Guthatsa, Hoons were raised to sapience, but little else is known about their history except that they have at least uplifted one race, the Rousit. Their reason for journeying to Jijo was because an oracle had told them that they would find their lost birthright on a forbidden world. They became the fifth wave of settlers who set down on the planet.

Retrieved from "https://aliens.fandom.com/wiki/Hoon?oldid=110911"
Community content is available under CC-BY-SA unless otherwise noted.