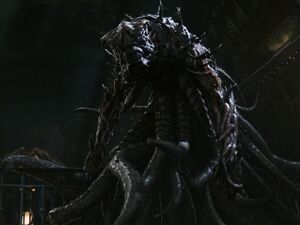 Unknown world in the Draco constellation

Men in Black
The Hive are a parasitic species that live in the Draco constellation.

In 2016 the Hive attempted to invade Earth via a wormhole portal connected to Paris' Eiffel Tower. Agents H and T were at the scene and managed to halt their advance, thus becoming heroes.

In 2019 the Hive started showing signs of activity on Earth again, when two Diads appeared and assassinated the Jababian prince, Vungus the Ugly, while he was staying on Earth. Since they arrived with hostile intentions, Agent T, now the head of the London branch of MIB and going by High T, suspected and confirmed that the Diads were infected by the Hive. During Agent C's investigation he discovered that M had received an item from the dead prince. Suspecting that she was collaborating with the Hive, he ordered MIB to bring them in. M had in fact been given a weapon capable of planetary destruction. Both the Diads and MIB proceeds to hunt for the now two suspected rogue MIB agents.

Whilst they were investigating a potential lead in the murder of Vungus the Ugly, they happen upon a creature from an alien species who takes a liking to M and pledges his allegiance towards her. M gives him the name Pawnie. After a confrontation with H's former lover, all misunderstandings are cleared when High T arrives to save M and H from the Diads. With the aliens dead, it is believed that the Hive threat is over. During the celebration of the achievement, M and H start to think that there is more to it than they at first had suspected. M and C put the pieces together along with H's faint recollections of the first Hive invasion and they come to the conclusion that High T has been the traitor for the past three years.

H and M hurry to the Eiffel Tower to stop High T from opening a portal, thus allowing the Hive to get a hold of the weapon and invading Earth. High T revealed that he had been infected by the Hive in 2016 and wiped H's memories in the process, secretly biding his time for the Hive to get a new chance at destroying the Earth. H fights against his former mentor although he is easily outmatched. During the confrontation, M is flung into the portal. H manages to appeal to High T's deeply buried personality, thought to have disappeared because he had been taken over, long enough for Pawnie to save M from the portal. Upon returning from it, H takes the weapon from the absentminded shell of the being once known as High T and tosses it to M. M proceeds to fire it off into the wormhole, erasing High T and the Hive at the same time.

Retrieved from "https://aliens.fandom.com/wiki/Hive_(Men_In_Black)?oldid=180397"
Community content is available under CC-BY-SA unless otherwise noted.