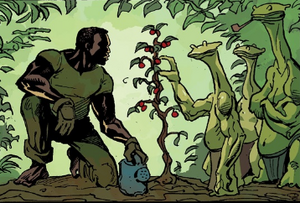 Planetoid
This sapient species were a race of primitives that Nkunda Akuma befriended when he went AWOL in the Colonial Guard.

They are a species of short stature, perhaps only about three to four feet tall. They are green skinned, with stubby legs, tendril-like arms. They have heads similar to mushrooms with four little stalks. In addition they do seem to possess two genders.

Decades ago, this species was invaded by the Colonial Government who began to subjugate the primitive natives. Nkunda a soldier then abandoned his post, not willing to be part of the slaughter and went native.

Nothing is known about them, but they do seem to be just peaceful agrarian farmers.

Retrieved from "https://aliens.fandom.com/wiki/Hill_Tribe_Alien?oldid=168772"
Community content is available under CC-BY-SA unless otherwise noted.