Hexapedes (from the Greek word έξι (exi) meaning six and the Latin word pedis meaning foot), also known as Yerik by the Na'vi are land herbivores inhabiting in various biomes of Pandora, including rainforests, savanna, subarctic tundra, and mountainous regions. 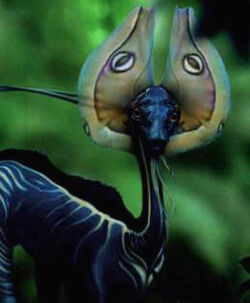 Hexapedes are some of the most beautiful and fragile creatures of Pandora. Although a prime target for any land or aerial predator, the rapid pace of their breeding keeps them from extinction. The Hexapede is a food source for the Na'vi. It is one of the prime targets for Na'vi hunters. 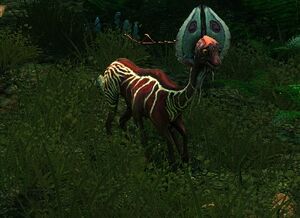 The hexapede resembles a Terran six-legged deer. They are dark blue herbivores, with white and yellow stripes (more like a zebra).

Their small, sloped skull is topped by a retractable, light-colored fan structure. This fan has an eye pattern on it similar to those found in Terran insects (such as the Wikipedia:Luna moth|luna moth) that serves as a defence mechanism, for flashing it to predators makes the creatures seem bigger and more intimidating. Their eyes are wide-spaced and large, and they have a longish snout that ends in a small bifurcating jaw and bifurcated lip that can be retracted. Twin horn structures sheathe a thin, patterned membrane. A skin membrane 'beard' hangs under the jaw and runs the length of the neck.

Twin lines of dark hairlike bristles run down the Hexapede's back. Long, thin neck and legs ending in round, beveled hooves also characterise the creatures. The body is dark blue with white-yellow stripes. Sizes range up to 1.5 meters long, 2 meters in height.