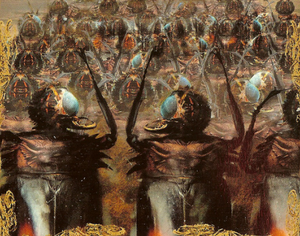 The Hetwans are a species of extraterrestrial insect creatures.

The Hetwan are large, sentient insectoid aliens that seem to exist as a collective hive rather than as a group of individuals. Male Hetwan consist of two arms, a pair of wings, fly-like eyes, and three constantly moving claws near their mouths. The claws are used to grasp a tube that is then used to project the Hetwan's acidic saliva. They continue moving at a slower pace after death. Female Hetwan are flying translucent sacks of organs. They travel in packs, where, upon encountering male Hetwan, are savagely torn apart, thus birthing perhaps a dozen Hetwan on the waist of the male.

Little is known about the Hetwans' life before Everworld, but like all alien species (those not from human mythology), they were brought there from another world (not "our" world) by their particular deity, the dread-god Ka Anor. They then began to conquer everything they came across, while collecting gods for their deity to consume.

The main characters in Everworld often fight against the Hetwan. Because Ka Anor intends to eventually kill and consume all of Everworld's gods, most of the peoples of Everworld would be considered enemies of the Hetwan, although they generally seek to appease them out of fear of destruction.

The Hetwan worship Ka Anor, the dread god of terror, and serve his will to devour all the gods in Everworld. Though aliens, the Hetwan have no high-tech weaponry. They do, however, wield devices similar to long straws (nicknamed "Super-Soakers" by the main characters), out of which they shoot a burning, venomous acid. The Hetwan themselves seem to feel no fear of death or anything. As repeatedly stated by them they exist merely to serve Ka Anor and are absolutely loyal to him.

The Hetwan live in a great city that resembles a giant needle sticking out of a pit (referred to by Chris as "Junkie Dreamland"), with an assortment of strange creatures from their home world.

The Hetwan kingdom in Everworld alternates between perfectly hemispherical hills and gullies, giving a scooped-out appearance. The alien trees make strange musical sounds. The Hetwan capital, where Ka Anor resides, is a massive tower (dubbed "Junkie Dream Mountain" for its needle-like appearance) in the middle of a lava and glass filled crater. The only transportation across this gulf is by means of the "Red Wings", giant insects that can carry passengers.

Retrieved from "https://aliens.fandom.com/wiki/Hetwan?oldid=178291"
Community content is available under CC-BY-SA unless otherwise noted.