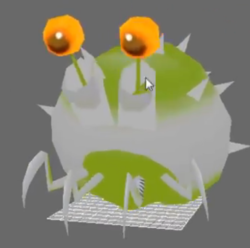 The Herculeseboshi is a giant extinct organism that once existed on PNF-404. While resembling an Earth Crab, or a Mitite, it's recently discovered that it's actually a species of Cottonade.

Named after the Roman hero "Hercules", Herculeseboshi is a extremely large creature with a very thick armored back with spikes coming out of it. Its eyes are on large stalks, which can retreat into a pair of armored protrusions of its shell. It can move around using its four sharpened legs.

Retrieved from "https://aliens.fandom.com/wiki/Herculeseboshi?oldid=149186"
Community content is available under CC-BY-SA unless otherwise noted.