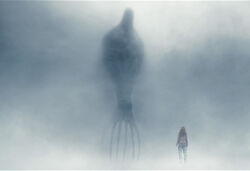 Heptapod A (spoken)
Heptapod B (written)

Ted Chiang
Heptapods are a sapient, space-faring extraterrestrial species. After first contact with Humans, two Heptapods, nicknamed Abbott and Costello, attempted to communicate with Dr. Louise Banks and Ian Donnelly from their ship in Montana.

These aliens are enigmatic creatures, which have come to Earth to offer Humans their language in exchange for humanity's help in the future. They are benevolent beings, whose ultimate goal is to unite humanity, as they will need their help.

They have jointed, arthropod-like limbs, each ending in a point that can split open into a seven-pointed starfish-like "hand". When walking, they appear to put five limbs ahead and the remaining two behind as they move. They have a dull-grey, fleshy-looking skin with a smooth texture, and they seem to have no visible eyes or mouths. However, several orifices are visible on Costello's upper body. Their physique seems to vary noticeably among individuals, as Costello is slightly lighter than Abbott.

The seven appendages only form a small lower portion of the Heptapod's body, with a large upper section that resembles the long diamond-shaped body of a squid, and a head-like object. at the top. Seen in silhouette, the upper body of the Heptapod resembles a vaguely humanoid figure, eerily reminiscent of images of a hooded Grim Reaper.

Heptapods use low-pitched, thrumming vocal communication that is unpronounceable by Humans (classified as Heptapod A), and a written script (Heptapod B). The vocal and writing components are unrelated. Heptapod B does not represent sound. As they have no apparent eyes, the low clicking sounds may be some form of echolocation.

Their written script consists of strange square shapes created with a red ink-like substance. The square shapes are modular, being comprised of various sub-sections conveying different meanings or concepts. Heptapod B can induce a non-linear perception of time for those who intimately learn and understand the language.

Heptapod ships (referred to as "Pods") are 450-meter-tall vehicles composed of a black, stone-like material of unknown composition. The Pods are oval and somewhat flattened in shape, resembling an immense, obsidian concave lens. They completely lack any surface features; there are no visible thrusters or steering mechanisms, nor are any emissions whatsoever detectable from these Pods There is, however, a small vertical corridor leading to a transparent barrier, through which the Humans communicate with the Heptapods.

The interior of the ship behind the barrier is made of a white, glass-like material with a serrated texture. The inner atmosphere (presumably the atmospheric conditions found on the Heptapods' homeworld) is thick and misty, and is dense enough to have properties between a liquid and a gas. Through this medium the Heptapods can fly through the air, and project their inky logograms within the mist. Louise was able to survive for several minutes in the Heptapods' environment, meaning it contains some amounts of oxygen, while the rest of its chemical composition is unknown.

When departing from a planetary surface, Shells do not actually move away from it. Instead, they slowly and procedurally turn into a misty substance that fades away and then vanishes completely. They may be some form of teleportation or faster than light travel.