Hengrauggi are large semi-aquatic predators native to the ice planet Delta Vega, in the Vulcan System.

Hengrauggi are red in color and have two tails and three pairs of limbs. Two of these pairs are insectoid in appearance and are used to walk on land, though it is possible that they also aid in swimming. The remaining pair is more vertebrate-like and ends in clawed hands. Besides sporting hundreds of eyes, the Hengrauggi head mainly consists of a huge mouth which seems to contain six mandibles linked together by skin and muscle, all filled with deadly sets of teeth. From inside the mouth protrude two long grasping tentacles used for capturing prey. While most Hengrauggi are no larger than the average Human, some individuals can grow much larger and are known to prey on large mammalianoid predators called Drakoulias. 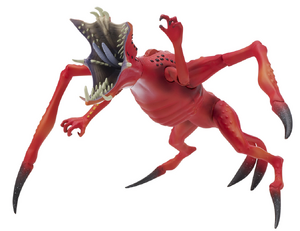 Retrieved from "https://aliens.fandom.com/wiki/Hengrauggi?oldid=158064"
Community content is available under CC-BY-SA unless otherwise noted.