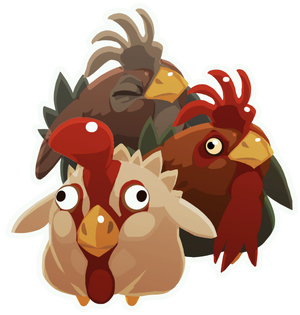 Hen Hens are a avian species found throughout the "Far, Far Ranch". Hen Hens are the main source of food for some Slime species, and an optional food source for most domestic Slimes. They are an introduced species to the Far, Far Ranch, diversifying and evolving out in the wild shortly after being brought by Humans.

Hen Hens are, overall, a larger breed of Chicken. It is a flightless avian species that was genetically bred in order to survive the climate and environment of the Far, Far Ranch. They are much stockier than Earth Chickens, their heads more broad and closer to the body. Their legs and wings and stunted, their feet no more than stubs, but still just as capable of standard locomotion.

Hen Hens lay eggs, up to three eggs during a twenty four hour period. The chicks, known as "Chickadoos", are birthed amongst a flock of Hen Hens, and remain with their flock in the wilds of the Far, Far Ranch planet until its old enough to fend for itself. Domesticated Chickadoos, interestingly, take less time to mature, possibly due to the more comforting lifestyle compared to wild specimens.

Mature females all have a single mate in the form of the Roostro, the dominant male Hen Hen.

Primarily domesticated, Hen Hens are often used by Ranchers as a meat source for their Slimes, and of course for their eggs. Elder Hen Hens are primarily meat resources, as elders are incapable of reproduction.

Retrieved from "https://aliens.fandom.com/wiki/Hen_Hen?oldid=166157"
Community content is available under CC-BY-SA unless otherwise noted.