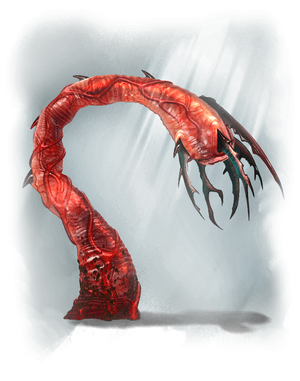 Fade to Silence
Hellvines are corrupted eldritch manifestations that reside in the corrupted grounds made by Nests. They're one of the many horrors that arrived in the Human realm.

The Hellvines are fleshy, worm-like creatures with a numerous amount of daggers and pincers at the front of the head, with stubbed horns running along its back. Like the Nests, they are unable to move and only attack those that enter their habitat

Retrieved from "https://aliens.fandom.com/wiki/Hellvine?oldid=187571"
Community content is available under CC-BY-SA unless otherwise noted.