Alien Species
Register
Don't have an account?
Sign In
Advertisement
in: All Tomorrows Universe, Bipedal Species, Humanoids,
and 8 more 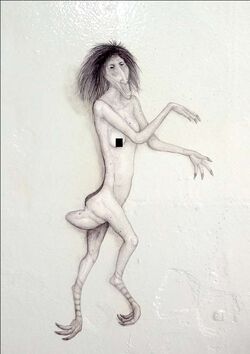 Created by the Qu from a colony of Star People

Nemo Ramjet
The Hedonists were a posthuman species created by the Qu from a colony of the Star People. The Qu held them as pets and they were the only animal life on their planet.

Their planet was covered in idyllic islands full of fruit-bearing trees and lakes full of bacterial manna. Not needing to care for anything, their minds were at the level of a three year old at best.

To stop the Hedonists from reproducing too much and crowding their planet, the Qu designed them to only be able to conceive after an enormous number of matings with different males over the timespan of over a decade.

After the departure of the Qu, they still prospered on their planet for about a million years, before a cataclysmic event nearly led to their extinction. However, some fast breeding mutants among them repopulated their new world and eventually gave rise to the Satyriacs.