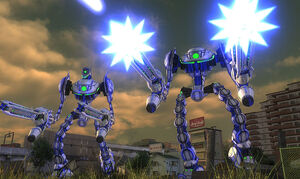 Earth Defense Force 2017 -
Hectors, also known as Hector Walking Arms, are a type of large robotic beings that the Ravagers deployed onto Earth alongside their many mutated insects. They are the replacements to the previous Daroga quadruped.

Hectors are very tall, human-like robots, standing hundreds of feet tall. They are built with long legs and arms, their arms equipped with various forms of machinery depending on the task they're about to undertake (mostly different weapons), along with a hatch on top of their heads which is again a form of weaponry.

Two variants: red, and blue, are known to have been deployed onto Earth, with blue variants being stronger and having their own type of weapons compared to red variants.

Retrieved from "https://aliens.fandom.com/wiki/Hector?oldid=181551"
Community content is available under CC-BY-SA unless otherwise noted.