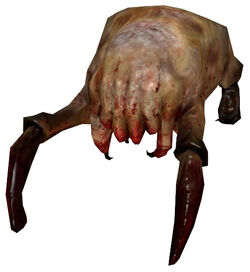 Half-Life
Headcrabs are cat-sized, mite-like creatures which come from Xen, though most were teleported to Earth in large numbers. All headcrabs have the ability to infect hosts by opening the host's head and driving its spinal cord through the victim's head, connecting it to the victim's spine, which allows the headcrab to control the victim. If the host is still partially alive and half aware to what has happened to him, less it be combine, played backwards the standard headcrab zombie's screams of pain are interpreted correctly as him calling for help.

The most common headcrab to be located is the "ordinary" headcrab. This variant has pale tan skin and dark red legs. When threatened it will lift up its front legs in a way reminiscent of a tarantula. It attacks by leaping at an enemy's head and biting with its beak-like jaws. As per nearly all "most common subspecies", this group is also the weakest subspecies of headcrab, and a whack with a blunt object will usually bring it down. It walks around using its teeth and when it stands still, it will use its talon like front legs, which are also used for propelling it forward during an attack. Headcrabs are used as a biological weapon by the Combine.

As their name implies, these headcrabs have longer legs, increasing their speed and making them difficult to hit at close range. This headcrab variety also employ better tactics, weaving around their opponent to strike from behind. Fast headcrabs have never been encountered on Xen, only on Earth, suggesting they may have been created by the Combine purely for use as biological weaponry. They seem to possess the ability to cling to walls.

Poison headcrabs are stronger than the other headcrabs. They have black skin and many hairs on their body, heavily resembling a four legged spider. Instead of biting and damaging their opponents, these headcrabs deliver a potent neurotoxin to their victims, making them easy prey for other enemies. They are very slow, more so than even ordinary headcrabs. Like the fast headcrab, they're a new subspecies, complimenting their swift brethren nicely. It emits a very distinctive chittering noise that is similar to a rattlesnake rattling it's tail.

The Armored Headcrab is a spiked variant of the normal headcrab. Its shell is visibly much bumpier, and has a grey color. It's spiky armored shell seemingly comes from an unknown Xenian species of plant or fungus life that can be seen throughout the environment

Once a headcrab gets a firm grip on a victim's head, it will infect and take over the new host's nervous system, turning it into a headcrab zombie. The type of headcrab determines the type of zombie, each having different abilities.

The ordinary zombies use elongated claws to strike at their victim, their halfway-rotting corpse is split open and is proven to be a mouth as it was shown to be revealed within the Black Mesa Research Facility.

The Gonome is the evolved form of the standard zombie. It can toss gobs of explosive slime at its opponents, and has grown longer claws. It sits somewhere between normal and fast zombies in terms of speed.

To increase their speed and mobility, fast zombies have done away with their skin and organs. They are very fast, bounding on all fours to their target, and can easily jump 2 meters (6 and a half feet). With these abilities, they are obviously more deadly then the ordinary zombies. This is an example of a headcrab that has more control over the host.

Poison zombies are the strongest of all zombies. They can carry up to four other poison headcrabs on their back, which they throw at potential hosts. They can withstand many gunshots, however, they are very slow.

A combine whose biological weapon backfired and took over the host body, they are capable of short sprints, yet have no elongated claws. It is not unheard of for them to equip a grenade, although in their zombified state, they know not of the danger but are still familiar with its use. Because of this, they kamikaze. These are not natural zombies, and none are seen as such, as headcrabs are taken from another Xen where they usually feast on Vortigaunts, Chumtoads, or anything else from their natural realm. They can be murmuring through their vocoders lines such as "sector is... (deep breath) not secure" or "necrotics... inbound", suggesting that they are aware of their status as zombies, and may also be why they kamikaze, attacking potential threats such as Resistance members and themselves.

Whilst the life cycle largely remaines unknown meant theory's have been put forward with some believing the infection process as unnecessary whereas others believe the zombie to mutate into a gonarch or that the zombie is the result of failed infection with the hole in there chest being exposure of an organ ( only found in the original prey ) which would later become the birthing sac, it has also been speculated that the headcrabs require mating with each other before coupling with one's head for the host/zombie to become a gonome (humanity's equivalent of a gonarch ) or a gonarch later in life which will then produce offspring.