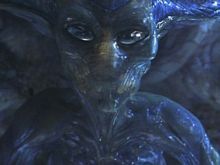 Space Locusts
Them
The Aliens

Patrick Tatopoulos
The Harvesters are a race of sapient, spacefaring aliens which travel from planet to planet like a galactic swarm of locusts, devouring each world's natural resources before moving to the next one, bringing their entire civilization in massive ships.

Physically, they're no more durable than a Human being, but compensate this by being enclosed within a biomechanical suit that gives them numerous advantages. They have a slender, quasi-humanoid body with three-jointed limbs and only two digits on their hands and feet. The head is enlarged and flattened. They have large, pupil-less eyes (or eye-like organs) and the suit armor includes a number of long, grasping tentacles protruding from their backs.

Lacking both ears and vocal chords, the aliens communicate using a sophisticated form of telepathy. They are also able to control other beings, at least partially, by attaching tentacles to their necks, and apparently do this in order to communicate with non-telepathic species. This species breathes oxygen and requires similar environmental conditions to Humans.

Their hive-like society is ruled by a massive Harvester Queen, who exerts complete control over all of her fleet's soldiers.

The Harvesters are little more than nomadic looters. They do possess far superior technology, including enormous fleets of ships; defense fields to prevent missiles from reaching their ships' hull; highly destructive weaponry and protective biomechanic suits.

When invading an inhabited planet, the aliens' military tactics consist of large-scale attacks, destroying the major cities around the globe simultaneously and then heading to the next largest, presumably going on until there is nothing left.

Although a single alien ship crashed on Roswell in 1947, the real invasion only started in 1996. At the end, the aliens were defeated and possibly driven to extinction thanks to the creation of a computer virus which temporarily removed the alien ships' shields.

Retrieved from "https://aliens.fandom.com/wiki/Harvester?oldid=195186"
Community content is available under CC-BY-SA unless otherwise noted.