Alien Species
Register
Don't have an account?
Sign In
Advertisement
in: Parasitic Species, Falling Skies Universe, Species of Practical Use,
and 7 more 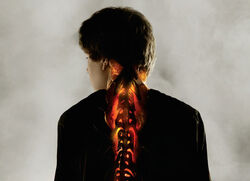 A Harness, as seen on a teenage Human male.

Falling Skies
A Harness is biomechanical species used by the Espheni and Skitters in their invasion of Earth. At first believed to be a form of mind control, the true effects are much more sinister.

Once a Harness is placed on a victim's back, it grows soft roots that attach to the nervous system that then harden, allowing the aliens to control a victim's actions. It also releases a powerful drug into the victim, keeping them docile and compliant. The substance also seems to alleviate pain, as children forced to work in a reactor showed no sign of pain despite being visibly ill.

The Harness also releases another unknown substance that will eventually mutate the victim into a Skitter. This fate can be avoided if the Harness is removed after a short amount of time, i.e. a couple of days or weeks. In such cases the remains of the Harness will then be sloughed out of the victim's back. However, should the Harness have been in place for several months, the process seems to continue, though at a slower pace.

The Harness also acts as a method of communication between Humans and aliens. The Skitters use it to telepathically communicate with their captives and the Espheni and Skitters can use it to make the victim a mouthpiece for themselves when dealing with Humans (or, presumably, other species they have invaded prior).

The Harness is a bio-mechanical parasitical creature. They are kept in large tanks and resemble large slugs, prior to being placed on a victim. When a victim is in position; tied to a gurney below the tanks, a Harness is released and led down a chute to the victim and guided on to the back by a Skitter.

Once in position, the Harness reveals a mouth full of needle-like teeth that clamp down onto the victim's neck. At this point, the victim loses free will. The tail of the Harness will then clamp down on the back and the creature grows a hard shell, metamorphosing into a complete Harness.

Despite having no access to modern technology, humanity came up with a low tech method to free the victims of a Harness.

Prior to the procedure, the victim is fed a drip of morphine to act as a bridge during the operation, so they will not go into withdrawal when the Harness is removed.

During the procedure, several people will lift the Harness to expose as much of the root system as possible, while another person will then cut the roots will a blow torch, cutting the victim free.

Later on, the alliance with the Volm granted humanity access to a more effective removal method. The Harness individual is placed in a chamber with their backs exposed while the device is worked by an operator. Once activated, the alien device attacks the Harness with electrical energy that disrupts its connection to the victim and weakens its grip before killing it. The Harness and needles are then burnt away, freeing the victim without any side effects.

Shortly after the Skitter invasion of Earth, the aliens begin rounding up children between 8 and 18 and placing a slug-like device on the child's back that renders the child a mindless slave of the aliens. Human observation of the aliens and the victims led the resistance to believe that the children were being used as a form of slave labor due to the aliens ordering them to scavenge metal and other raw material.

Initial attempts at removing the Harness were unsuccessful and ultimately killed the child in question. It was only later that a resistance doctor came up with a theory that not only explained why, but ultimately could safely free the victim. After capturing a harnessed child, the doctor examined the child and noted his dilated pupils and came to the conclusion that the Harness released a powerful drug into its victim to keep them compliant. When the Harness was forcibly removed, the child went into shock from withdrawal and died. Seeing that morphine was the closest Earthbound medicine they had to the drug, they used it as a bridge during an operation on a boy to cut the Harness off, freeing the boy from alien control. This process was again repeated on a captured group of Harnessed children that included Tom Mason's son, Ben.

Weeks later, concerns were raised by some of the resistance members over Ben and another boy named Rick Thompson. Whilst the remaining spikes from the Harnesses in the other children had fallen out of their backs, theirs remained in place. Also, Rick started to display increasingly bizarre behavior and an examination of Ben revealed bizarre skin growth around the spikes. On a hunch, Dr. Anne Glass autopsied a corpse of a Skitter and made a horrifying discovery: buried in the corpse's back was a Harness. This meant that not only were the Skitters themselves slaves, but they had most likely been another life-form before they were harnessed. Revealing her findings to Tom, they realized that the aliens were using children not only as slaves but also to replenish their forces.

At the end, Tom was forced to go with the alien leaders, the Espheni, in exchange for releasing Ben from the conversion process.