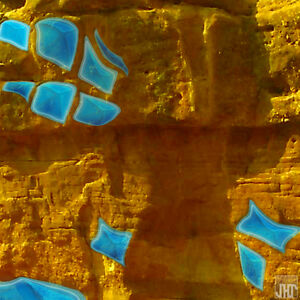 The Sirens of Titan

Harmoniums are small, apparently semi-sapient organisms indigenous to the caves of planet Mercury. Semi-transparent blue in color, Harmoniums are paper-thin and have no visible distinct organs. Having no eyes or other sense organs, they can only perceive the world through touch and rudimentary telepathic abilities.

Harmoniums feed on nearly undetectable vibrations on the planet's surface. These vibrations are called "Mercury's song". Harmoniums reproduce by "flaking off" tiny fragments that later develop into adult beings. When a Harmonium dies, its body shrivels up like dried fruit.

Harmoniums communicate with an extremely limited language that consists of only two messages. The first is "Here I am." The second, which is an automatic response to the first, is "So glad you are."

Retrieved from "https://aliens.fandom.com/wiki/Harmonium?oldid=166455"
Community content is available under CC-BY-SA unless otherwise noted.