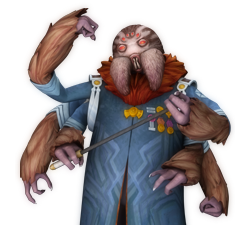 The Harch are a species of sapient arachnoid beings native to planet Secundus Ando, in a galaxy far, far away from ours.

They are bipedal beings with three pairs of arms, the second and third pairs protruding from behind the first one. Their bodies are covered in thick brown fur and they have three fingers on each hand. The head sports two very large chelicerae, with the mouth placed in between. Inside the mouth there are long fangs which clap with each other during speech, producing series of snapping sounds. They've also got six red eyes arranged in a semicircle above the mouth.

So far the only known member of this species was Admiral Trench, a member of the Separatist Confederacy during the Clone Wars.

Retrieved from "https://aliens.fandom.com/wiki/Harch?oldid=160413"
Community content is available under CC-BY-SA unless otherwise noted.