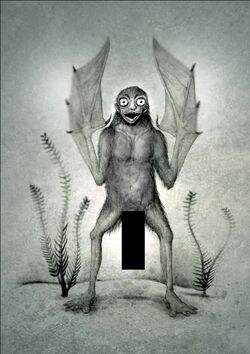 Evolved from a flying species created by the Qu

Nemo Ramjet
The Hand Flappers were a posthuman species created by the Qu from a colony of the Star People. They evolved from a butterfly-like flying human species unrelated to the Flyers.

After losing their ability to fly, this species used their still very big hands with webbed fingers for mating dances and signalling each other their sexual availability. But the form of the hands proved unable to use tools, and they never developed a civilization like their distant ancestors.