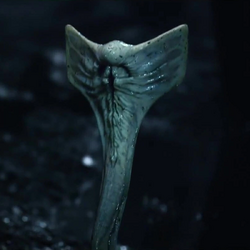 Alien
The Hammerpede is a worm-like creature discovered by the crew of the USCSS Prometheus inside the Engineer's Temple on LV-223, one of the moons of the gas giant Calpamos, in the Zeta Reticuli System, in 2093.

Their origins are not fully understood, but they appear to have originated from the moon's indigenous worms mutated by the Black Liquid that was accidentally spilled into the soft ground and absorbed by them. As a result, the formerly harmless worms mutated into a much larger species of vicious serpentine predators which share some traits in common with the Xenomorphs.

Hammerpedes are very strong predators with acidic blood. They emerge from the ground and can easily overpower Humans, being powerful enough to seemingly break bones as they coil themselves around the limbs of their victims. The fact that they've been observed to crawl into the mouths of Humans strongly suggests that parasitism and possibly endoparasitoidism may be part of their natural life cycle; which is supported by it being present in other mutations resulted from the Black Liquid, such as the Trilobite, the Neomorphs of Planet 4, and even the Xenomorphs. Still, the fact that the Hammerpede apparently kills its intended "hosts" rather than keeping them alive to incubate its embryos might suggest that the actual reason why they crawl inside the victim is to devour the victim from within, or possibly lay eggs which will feed on the corpse's remains when they hatch.

Another aspect that they share with the other creatures derived from the Black Liquid is their extreme hostility, as they've been shown to attack anything on sight. Their size is comparable to that of many Earth snakes, and their movements somewhat resemble a cobra's. The Hammerpede lacks eyes, and how it detects its prey is a mystery. Perhaps it "sees" through movement or heat signature, or "senses" things around it like the Xenomorph. They attack by moving with an exceeding speed, and attach themselves to the victim's arm, then go down the throat of the "host", presumably killing the "host" by suffocation. As stated above, its attacks may bear resemblance to the Xenomorph's facehugger stage, but it is unknown whether it is impregnating its victim or just feasting on the victim's insides.

Retrieved from "https://aliens.fandom.com/wiki/Hammerpede?oldid=174041"
Community content is available under CC-BY-SA unless otherwise noted.