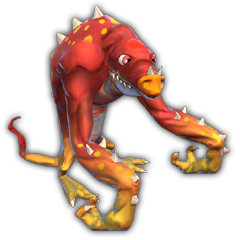 The Hammer is a larger carnivorous species from the moon Hadea, and one of the many threats to natives of said moon.

Hammers are larger than most other lifeforms, with a reptilian appearance to their overall anatomy: an elongated snout similar to a crocodile, and a lizard-like tail behind it. A notable detail on the Hammer is its very large forearms, almost triple in length to its own legs, and as such also used them for locomotion.

They are also noted to be pack creatures, and often appear to attack in fairly large numbers.

Retrieved from "https://aliens.fandom.com/wiki/Hammer?oldid=154251"
Community content is available under CC-BY-SA unless otherwise noted.