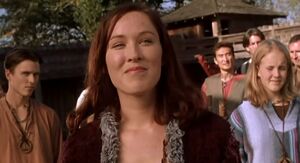 Andromeda
The Hajira are a race of genetically-engineered Humans.

The Hajira are a genetic offshoot of the Human race, modified to pass on memory through genetic material. Their offspring are already born with their parent's experience and that of their predecessors.

The Hajira are a highly intelligent species and mostly emulate the teachings they were taught, similar to children. Due to the influence of the Wayists, they are deeply spiritual and believe in the Way and its teachings. They highly regard Rev Bane, as he is a Magog the same as the Anointed, the focal of their iconography.

The Hajira settled on the planet Serendipity and remained isolated from Known Space. The mostly avoided the Long Night, and collapse of the Commonwealth but overtime, their technology withered to nothing.

The Wayist movement rediscovered them and converted them to its teachings. However, the Hajira became the target of slavers, forcing the Wayists to appeal to Captain Dylan Hunt to intervene. However when the head monk in charge of the Hajira found that Dylan couldn't indefinitely protect them and sought to teach them how to fight, he refused to let the captain train them and stain their hands in blood, destroying the weapons cache.

To save themselves, Tiama, one of the Hajira and a devout believer of the Anointed, an enlightened Magog, chose to infect herself with Rev Bane's offspring, believing that the Magog would be like the Anointed that the Wayists preached. After the Magog killed off the pirates, the Magog proceeded to infect the Haijira, however they retained the memories of Tiama, and wished to create a new generation of Magog Hajira who would be born, creating a Wayist sect of Magog warrior priests.

Retrieved from "https://aliens.fandom.com/wiki/Hajira?oldid=198735"
Community content is available under CC-BY-SA unless otherwise noted.