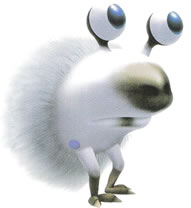 The Hairy Bulborb is a northern, lesser-known species of Grub-Dog that was only recently discovered on PNF-404.

The Hairy Bulborb is similar to other Bulborbs in physical anatomy, with white skin and blue spots along its backside and its feet, front snout, and eye stalks are colored dark grey. These Grub-Dogs also have a coat of white fur along their bodies, which keeps their vital organs warm and as such allowing them to live further north than other members of its species.

As they spend their lives on colder regions, most of which is spent underground, Hairy Bulborbs are naturally more aggressive, and more carnivorous. This natural aggression is possibly from the harsher environment where it lives, as it has less food than regions further south.

Retrieved from "https://aliens.fandom.com/wiki/Hairy_Bulborb?oldid=169533"
Community content is available under CC-BY-SA unless otherwise noted.