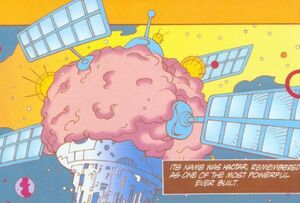 Influence over minds and matter

Douglas Adams
Hactar was originally a sapient, hyper-intelligent computer built over 20 billion years ago by the Silastic Armourfiends of Striterax.

The warlike Armourfiends ordered Hactar to design what they referred to as the ultimate weapon. Taking the request literally, Hactar created a device that could connect all stars in the universe via hyperspace, and cause all of them to simultaneously go supernova, bringing an end to all of creation.

Reluctant over the idea of being responsible for such omnicide, however, Hactar sabotaged his own design, leading the enraged Armourfiends to pulverize him. Over the next billions of years, Hactar's remains survived as a dark cloud of debris in space and he not only retained his sapience but also started to master the ability to slowly and subtly influence minds and matter within his reach.

Circa 10 billion years ago (and long after the Armourfiends had become extinct), the remains of Hactar formed the black cloud that isolated the planet Krikkit and its sun from the rest of the universe, and Hactar himself assisted in the cultural development of the Krikkiters: a species so completely isolated that the mere possibility of there being other worlds and other life forms beyond theirs was inconceivable and totally incompatible with their mindset.

Having helped the Krikkiters reach this state, Hactar slowly arranged bits of matter in the shape of a semi-functional (unoccupied) spaceship and made it crash on Krikkit, where it was found and reverse-engineered by the natives. When the Krikkiters aboard their first ship finally left their dark envelope and gazed upon the billions of stars and galaxies, they saw no alternative but to try to annihilate them, and thus started the Krikkit Wars: the most devastating conflict ever recorded in history, through which Hactar hoped to finally achieve what he had been designed for.

Retrieved from "https://aliens.fandom.com/wiki/Hactar?oldid=164314"
Community content is available under CC-BY-SA unless otherwise noted.