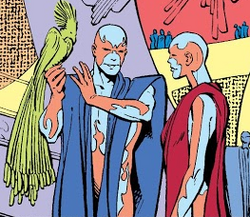 DC Universe
The H'v'ler'ni are a species native to the planet Earth in the DC Universe.

Arising 500,000 years ago on Earth the H'v'ler'ni created the from the city-state of A'r'ven located in South America. They considered themselves to be the most perfect species of the planet at the time, until a terrible plague attacked them. Within ten days of the plague forty-thousand H'v'ler'ni were killed. When it was determined that the plague originated from the primitive humans that they kept as pets, the H'v'ler'ni. They attempted to wipe out the humans but it was already too late to purge them. To escape their fate, twenty million H'v'ler'ni set sail in suspended animation beyond the Solar System. Five hundred however chose to remain on Earth, uploading their minds within the body of an indestructible robot. The robot would monitor the development of the humans and when they reached a level of comparable technology the robot would emerge from hiding and transfer their minds into other living bodies that would be naturally immune to disease. When the encountered Superman, they attempted to take over his body seeing it to be impressive and invulnerable. However the multiple minds in the robot fought for the privilege of possession of the body. Confused on what action to take, the robot exploded itself.

The H'v'ler'ni were humanoids with pale green skin with orange patterns. They were physically perfect; however, that perfectionism cost them the natural immunity making their bodies germ free, leaving them susceptible to disease.

The H'v'ler'ni were an advanced culture possessing thousands of years before humans created a civilisation of their own.