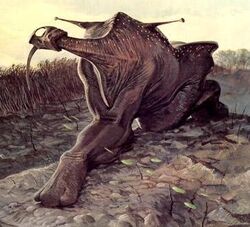 Expedition
Gyrosprinters are the fastest ground-dwelling organisms on Darwin IV, and can easily outrun many of their predators, such as the Arrowtongues and Prongheads. Evolved from quadrupedal fauna, their legs have become fused at the forelimbs over the course of millions of years, leaving them with literally "one foot in front of the other". To counteract this, they have developed a set of hyper-developed halteres in order to keep in balance, which allows them to continue careening across their home biomes despite what would otherwise be considered an unfortunate deformity.

Gyrosprinters are also extremely flexible and maneuverable, and can turn on a dime to elude most predators with ease. The have a relatively small, bony, almost skull-like cephalon (or "head") at the end of their strong neck, which serves two functions: it not only houses the primary sensory organs of the beast, but also provides a sheath-like tip for its 2 meter long tongue, which, like the Arrowtongue, is used for eating. To aid in a lifestyle of such energetic activity, they have two hearts and nostrils which have been relocated to their shoulders in order to provide a more steady stream of oxygen. Bioluminescent patches dot their back.