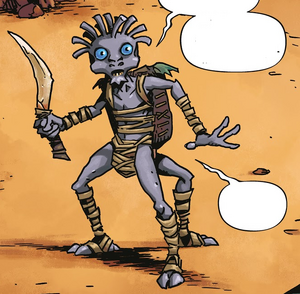 Grendel
The Gyk are an alien species native to the planet designated as HTX 81635.

The Gyk are tri-pedal quasi-hominids that evolved on a world that hosts an unusual assortment of moons for its size. As a result global magnetic fields are erratic.

The Gyk exhibit characteristics of both arthopodal and mammalian ancestry. Their skin is thick and fibrous containing traces of chitin. Gyk are herbivores surviving off stems and foliage of the flora that dominate the biosphere. Mouths are exclusively used for chewing. Their cranial projections allow them to consume liquids which they use during rare rainstorms. Besides during the rainy days, the Gyk live in a state of agitation. They have two olfactory systems, one being highly sensitive to moisture. Even their fingertips can detect trace amounts of water.

The species has three genders:

Grendel Prime in search of a new world for humanity o start anew located the Gyk's planet. Using his drone Seven as a translator, the Gyk originally believed him to be a god as he killed a beast of the desert. Grendel believe that the world was possible for human habitation, though Seven advised against the idea due to the possible cultural contamination of the Gyk. Adding that there was resistance to Grendel's existence by the local A-Male who feared for its position in the colony. It claimed that the cyborg was an impostor and the Gyk no longer welcomed Grendel. Grendel determined to create a peaceful bond with the Gyk attempt to bribe them with a large berry tree. However the berry tree only was met with apprehension as it was unsuited for harvest and dangerous. The water spilled releasing a massive wave of water. Soon tendrils of vines grew from the ground and enveloped Grendel in a deadly embraced. With no recourse Grendel com-busted himself to get free but also destroyed the Gyk colony. Luckily Seven detected another Gyk colony 300 kilometer away indicating that the Gyk species would survive.

The Gyk are an industrious race to an extent at the level of the Stone or Bronze Age level of technology. Life is hard and arduous for the Gyk, along with the severely limited resources there are many fierce predators to contend with. They have no understanding of fire and developed only the most rudimentary tools and possibly never advance far.

Gyk build colonies in desiccated remains of massive flora that overgrew their capacity. These plant-based structures are millennia old, sprouted before erosion channel much of the rainfall into the valley basins below. The Gyk burrow into these husks and create shelters for their colony, located high up in the hills and away from the predators that roam the "water fields". In the rare rainstorms, the Gyk gather atop their tree-condominiums and enter a communal meditative state.

Water being scare on their world, and their most precious resource requires the Gyk to hunt for their fluids in the dangerous "water fields" where the Kief-Beast lay in wait for the Gyk. Their relationship with water is a sacred bond. The never let so much as a drop touch the ground.

The water the Gyk receive from the harvested Shk-Chrg are placed in the only free-standing structure in the whole colony. A cistern that is built on the grounds, as their tools are fairly primitive and thus are unable to excavate the ground. Here is where the Water Sacrifice is held.

The Gyk chew and process plant fibers for myriad uses. Such as their strap-binding which are not for protection but rather to subdue anxiety.

Gyk are hive-minded with little curiosity or individuality.

Family units are not biological, but rather a grouping of up to a dozen individuals who "share water"

She-Males lay nested egg clusters, only a tiny portion of which are viable. Mating is frequent and public.

The A-Male rules the colony, and commands a disproportionate share of the communal resources and is pampered and cared for in every fashion eating the colony's unviable eggs.

The A-Male acts not only as primary progenitor and monarch of the colony but also its spiritual guide. It is known by many names depending on the function at the moment: Mother-Gyk, Royal-Gyk, Priest Gyk. All the Gyk are fanatically loyal to the A-Male and will take its words at heart.

The Gyk believe that the A-Male speaks directly to their deity the "Upright God", a being that could slay the Kief-Beasts.

Retrieved from "https://aliens.fandom.com/wiki/Gyk?oldid=157521"
Community content is available under CC-BY-SA unless otherwise noted.