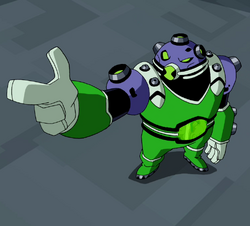 Ben 10
Gutrot's Species are an unnamed species from an unnamed rocky/swamp planet whose dense atmosphere is thick with swirling gases and vapors.[1]

Members of this species are mechanical humanoids with four digits on each hand, consisting of three fingers and an opposable thumb. Like Orishans, they have nozzles/openings on their bodies from where they can eject different types of gas. They also have glass on their stomach from where any internal gases can be viewed.

Although they traditionally have blueish-purple skin, this species can come in other colors. For example, Nega Ben's Gutrot has grey skin.[1]

This species can expel a corrosive digestive gas that breaks down mineral elements into a vapor that they can inhale.[1]

Being comprised mostly of gaseous chemicals, this species are able to make compounds of almost any type and expel them from the various nozzles on their body.

The strength of the gases that this species generates depends on the amount expelled and their chemical makeup, but are powerful enough to repel Dr. Animo's mutated beasts.

This species has an advanced knowledge of chemistry, as well as some degree of knowledge on a species' biology, allowing them to create a gas that can specifically target the species in question. One such pheromone has been designed to attract To'kustars.

This species is immune to both poisonous and acidic gases, as they can inhale them and break them down into something harmless. Other gases they are immune to include a Nemuina's sleeping dust, freezing gases,[1] the Forgeti's amnesia-inducing gases, and gaseous mutagens such as Nanny Nightmare's baby powder.[2]

If this species creates a gas inside their bodies before suddenly deciding not to use it, they can simply "neutralize" the gas without having to release it.

This species can absorb gas by pulling it through their nozzles. Likewise, they can intake and get rid of harmful gases.[1]

Members of this species are significantly intelligent in general, as they seem to understand the mechanics and ramifications of time travel. Additionally, they are aware of the effects of physical trauma, as hitting someone on the head would simply result in a concussion rather than amnesia.

It is possible that this species can replicate liquid substances in gaseous forms, such as a special orange liquid used by Kraab to neutralize an Ectonurite's powers.[1]

This species can survive in the vacuum of space.[1]

When this species uses their gas, it makes a large cloud which is susceptible to prevailing winds and can endanger bystanders as a result.

Some of the gases generated by this species are flammable, so they must be used carefully in situations that might ignite them.

This species' gases are ineffective against opponents who are effectively shielded through the use of a gas mask or insulation.

This species has poor reflexes and thus cannot react quickly.

Like other organic beings, this species can be erased from existence by a Chronosapien Time Bomb.

Unlike Funguy's Species, this species cannot generate spores because they only work with chemical gases.[1]

There are certain gases this species is unable to make, such as a form of steam replicating the magical properties of the Fountain of Youth.[1]

Despite being able to absorb gases, this species cannot absorb an Ectonurite on wisp form.[1]

Despite their immunity to gases, this species would not be immune to gases as strong as liquid nitrogen.[1]

This species makes and sells unique yet illegal products for the alien underworld such as love potions, rather than narcotics anyone would make.[1]

Members of this species are usually pretty calm and level-headed.

This species speaks with Brooklyn accents and gruff tones that give them a rather tough yet easygoing "wise guy" sort of vibe. They also have a cynical sense of humor, and can communicate with both verbal and pheromonal languages.[1] 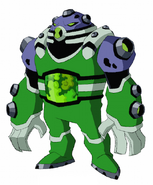 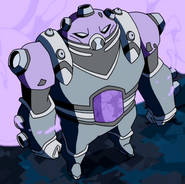