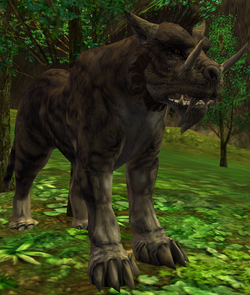 Star Wars
A Gurreck is a horned, predatory organism indigenous to the forests of the moon of Endor.

Quadrupedal creatures, they stand upon clawed feet and utilize striped fur, likely for a similar reason as that of a tiger of Earth. A pair of large, tusk-like fangs protrude from their upper jaw, although some of the species in fact can be found with two pairs instead - perhaps evidence of sexual dimorphism or a number of subspecies. These tusks are used by the graceful and equally aggressive Gurrecks to chase down and ultimately impale prey upon their tusks. While nearly always found hunting amongst the planet's forests, a few can instead be found prowling the various deserts and hilltops on their moon home.

Gurreck infants were known to be tamed by many intrepid adventurers during the Galactic Civil War.

One Ewok warrior named Teebo wore a Gurreck skull atop his head in an attempt to prove his strength and courage to others.