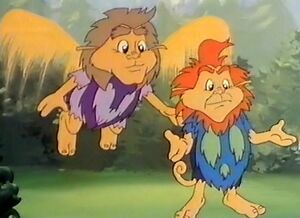 Bob Carrau
Gupins are a sapient bipedal species which inhabits the forest moon of Endor.

Shorter even than the native Ewoks, Gupins are physically-unimpressive bipeds, but possess a useful ability to shapeshift, which allows them to assume larger and more menacing forms.

Under normal circumstances, however, a Gupin cannot shapeshift without external aid, and the form the Gupin assumes is taken from the imagination of those around it. In other words, the Gupin needs others to picture it as something else in order to change into it. The Gupin king can command other Gupins to transform at will, but it's not known whether other Gupins share this ability.

In their natural form, Gupins are mammalian humanoids with tridactyl hands, a long tail, and a pair of wings on their backs. Their natural enemies are the giant Grass Trekkers.