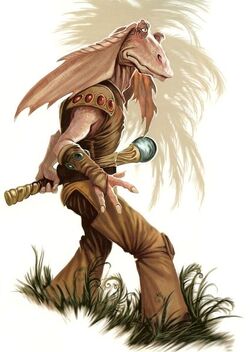 Gungans are a semi-aquatic humanoid species indigenous to planet Naboo. Their species is divided in two separate races: the Otolla and the Ankura.

Gungans are tall humanoids with a bill-like mouth, large nostrils which close when they are diving, and very long ears which aid in swimming. Their eyes have nictitating membranes (transparent eyelids) which allow them to see underwater. The Otolla subspecies is leaner, has a long neck and short partially-retractable eyestalks, unlike the stout Ankura subspecies. Gungans are omnivorous and have strong teeth and a long extendable tongue used to capture food. Some Otolla Gungans develop short catfish whiskers as they age.

Amphibianoid in nature, Gungans start life as tadpole-like beings. They prefer a humid, moist environment, as arid weather is harmful to their skin. Their internal skeleton is cartilaginous and very flexible, giving them a powerful jump. Gungans have four fingers on their hands, including one opposable thumb.

Gungans can breathe underwater. However and in spite of their amphibianoid nature, Gungans actually evolved as land creatures, as evidenced by their cloven feet and their humanoid body plan.

Despite being amphibious creatures and capable of breathing underwater, Gungans prefer to live in large submerged cities enclosed within hydrostatic bubbles. This probably owes to them having evolved on land and driven to a more aquatic existence by the invading Elders.

Gungan laws are very strict, and even small transgressions may be punished with banishing.

Gungan technology is notable for being organic, more than mechanic, in nature. One of their greatest technological achievements are the hydrostatic bubbles that surround their underwater cities. The walls of these bubbles are strong enough to keep the water outside, yet permeable enough to allow Gungans and eventual visitors to pass through them easily in order to get in and out.

The two subspecies of Gungans have long formed a peaceful symbiotic relationship. Although the Otolla Gungans greatly outnumber the Ankura Gungans, the Ankura have a strong presence in the government. The Glurrgs, a species of bipedal, non-sapient creatures that appear to be evolutionary related to the Gungans, have been domesticated by them and are largely used as workers in Gungan society. Despite being non-sapient, Glurrgs are skilled laborers and are able to use technology. The Glurrgs' intelligence level might be similar to that of Earth's Chimpanzees. Species domesticated by the Gungans also include Blarths, Kaadu, Falumpasets, Fambaas and Zalaacas.

Gullipuds, small inflatable creatures from the swamps of Naboo, are used by Gungans to play Gulliball.

Gungans are the original inhabitants of planet Naboo, but have shared their homeworld with unfriendly colonizers. Archaeological evidence of the Gungan civilizations extends back to half a million years ago, a time in which the planet was going through an ice age. Even back then, Gungans fought violent wars against the Bursas, a dreadful semi-sapient quadruped of the planet, which they have successfully driven to extinction.

More than seven thousand years ago, the planet Naboo was colonized by an ancient reptilianoid race known as the Elders, which declared wars against the Gungans, eventually forcing them to move to the waters, where they have lived ever since, be it in the bottom of deep lakes or in and near the swamps. Even after the Elders civilization died out, Gungans did not abandon their new habitat.

Humans have also colonized the planet of Naboo. Although they usually don't get along well with Gungans, the two races have lived in relative peace, due to the fact that the semi-aquatic Gungans have little contact with Humans. In spite of this, Gungans have incorporated the Human language and created a mixed dialect that combines Galactic Basic with Old Gungan, resulting in a rather peculiar speech pattern.

Gungans have recently established colonies in two moons of Naboo: Ohma-D'un and Rori.