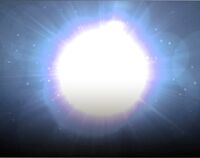 The Gulanee are a mysterious member race of the Votan. They are an energy based race from the planet Gula.

The Gulanee are beings of pure energy that evolved on the gas giant Gula. They wear carefully crafted encapsulation suits that are difficult to build and maintain. A Gulanee outside of his encapsulation suit can’t survive for more than a few hours before his body dissipates.

The Gulanee are a mystery to everyone, including other Votans. Like the Sensoth and Liberata, they were not politically strong when the exodus from the Votanis system was being planned, and very few were present in the evacuation fleet.

In 3175 BCE After the realization that their star system was doomed, the Indogenes sent an expedition to the planet Gula, looking for a suitable energy source to power their Ark fleet.

There they discovered the Gulanee and tried to establish contact. The Gulanee formed a pact with the Votanis Collective, agreeing to harvest gulanite, a precious fuel source found on their planet, in exchange for allowing a portion of the Gulanee population to accompany the Arks to Earth.

Most of their people stayed behind, confident they would somehow endure the destruction, although some Gulanee seemed to find it unfair how few of them were taken. With such a small contingent included aboard the Arks, it is a rare thing to encounter a Gulanee in the New Frontier.

Retrieved from "https://aliens.fandom.com/wiki/Gulanee?oldid=174546"
Community content is available under CC-BY-SA unless otherwise noted.