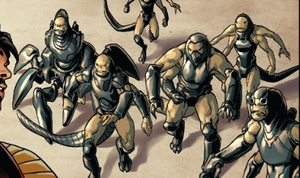 Marvel Universe
The Gryndans are an alien race from the planet Grynda in the Marvel Comics Universe.

The Gryndans were reptilian creatures with four arms and two legs.

Doctor. Stephen Strange in an effort to repair the damage done to Earth's magic following its near annhilation at the hands of the Emprikul attempted to restore it to its former glory. Though the Asgardian Loki Odinson managed to upstart Earth's magic using the magic of YGGDRASIL, Earth's magicalscape was still a shadow of its former glory. After some advice from Tony Stark sought to the stars to gather exotic magic from other worlds to heal his magic deprived home. During his journey, Strange's ship was hit by a comet causing him to crash on Gryndan.

The Gryndans having never encountered a creature like Stephen, captured him and subjected to to numerous cruel experiments. Rescue for Stephen would come in the form of a self-proclaim arcanologist who was imprisoned alongsde him for attempting to steal a heretical long forgotten supposedly magic artifact of the Gryndans.

Using her technomancy they two escape with the artifact the Eye of Basphorus, a item said to be able to grant one unlimited wish. While escaping Stephen noticed that the Gryndans were preparing a massive invasion fleet. Knowing he had to stop their invasion plans, Dr. Strange used the artifact to seal the planet in an indestructible shield saving the galaxy before departing with his new companion Pkkrfmknna to seek out new forms of magic.

The Gryndans were a homogenous race of scientist and inventors that practice the most advanced disciplines in the galaxy. According to Dr. Stephen Strange their technology was akin to wizardry. The Gryndans didn't have much experience with alien life-forms. They were smug and arrogant and had little interest in offworld travel.

Science is so ingrained in their culture they have no word fro magic. However apparently in prehistoric times the Gryndans did possess superstitions of concepts and things that did not fit into their criteria for science and were buried deep in caverns.

Retrieved from "https://aliens.fandom.com/wiki/Gryndan?oldid=130891"
Community content is available under CC-BY-SA unless otherwise noted.