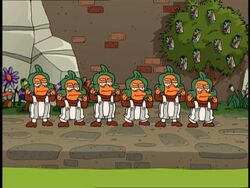 Same as a dwarf

They are employed by the Slurm Worms to work in the fake Slurm Factory. They spontaneously burst into song with a warning about asking questions of Glurmo. They aren't paid to sing and Glurmo denies them their bathroom break for singing when they should be working.