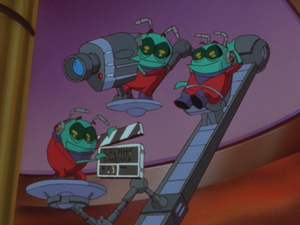 Speak English in the series

The Grubs are a sapient species of stumpy insectoid beings possibly native to Planet Z. They were subjugated and enslaved by Emperor Zurg and currently work for him, performing a wide range of technical tasks and also acting as personal servants for the evil emperor.

The Grubs are usually described as being Zurg's equivalents to the Star Command's Little Green Men, although they lack a hive mind and are far less competent. Besides Grubs, Zurg's other subjects include robots and peculiar creatures called Brain Pods.

Retrieved from "https://aliens.fandom.com/wiki/Grub?oldid=189583"
Community content is available under CC-BY-SA unless otherwise noted.