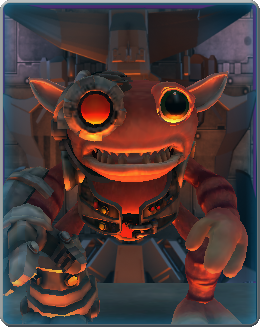 Spore
The Grox are a sapient race of evil, cyborg creatures that have control over most of the core region of the Milky Way Galaxy. A very ancient and mysterious race, the Grox are among the most important and the most feared empires that ever existed on the galaxy. They are widely known for their cybernetic implants, their aggressiveness and extreme hostility towards most other sapient species and for being only able to survive in barren, sterile worlds, uninhabitable for all other sorts of creatures. Their mighty empire extends for over 2400 star systems, completely encircling the enigmatic super black hole that marks the center of the galaxy.

Without their cyborg implants, the Grox are physically weak humanoids of mammalianoid evolutionary background. They are short-statured and have a carnivorous diet. Their feet sport two large toes and their hands are tridactyl. In spite of the fact that they lack any kind of claws or nails, and their only mean of physical attack seems to be their teeth; their bite is also relatively weak compared to other carnivorous creatures. Their large eyes and ears are believed to provide them with acute senses, which was likely to have been their main way of preventing attacks before they evolved into an intelligent species. Some speculate that the Grox are actually evolved versions of humans, since Earth in Spore is no longer inhabited by humans, and also because on the bottom of the Dance with the Devil badge (a badge earned by allying with the Grox, understandably a very difficult thing to do), you find the word good, but in atrocious writing.

There are several evidences indicating that the Grox have a very unusual biology. For one thing they are only able to survive on worlds classified as T0, which are usually barren lands with extreme temperatures and very thin atmosphere, deemed uninhabitable for virtually all the other species. Raising the terraforming level of a planet, which normally makes it habitable, will instantly kill the Grox. It is also possible that radiation is beneficial for their metabolism, since they will only colonize planets on the galactic core, an area known for the high radiation level caused by several black holes an densely clustered stars. Strangely, the Grox also seem to be extremely toxic to other lifeforms, to the point that if a Grox citizen is abducted by an alien starship it will be automatically incinerated for being "too toxic for your cargo hold." Strong evidence that the Grox are not carbon-based lifeforms is given when they use the expression "slow thinking carbon-based lifeforms" as an insult to other species. The Grox may actually be silicon-based lifeforms. It is also possible that their biology is carbon-based but that they do not consider themselves as such because of their technological implants.

The origins of the Grox are likely to be forever lost to history, but they are known to be one of the most ancient living empires in the Spore Galaxy.

The Grox are as evil as they are enigmatic. They posses advanced technology and have colonies in 2400 star systems in the galactic core. Still, Grox starships are often found thousands of parsecs away from the core, where the Grox seem to attack other empires' colonies in an almost random fashion, only to destroy them and depart. On planets whose native inhabitants have not yet developed space-faring technology, the Grox starships will still appear in order to abduct non-sapient creatures of the local fauna, possibly for study. Although the Grox have caused the extinction of several species, sometimes they will bioengineer other creatures and use them as soldiers, as is the case of the Dronox and the Insectrox, which are used mainly for land-based operations, since the Grox themselves are unable to survive on most of their enemies' planets.

Though it has been stated that the Grox do not understand relationships, some empires have actually managed to become friends or even allies of the Grox. Making an alliance with the Grox is considerably difficult due to their instinctive hatred and prejudice against other species. In order to do so, one must perform several actions that will please the Grox such as agreeing to go on missions for them, giving monetary gifts and starting a trade route with them. The Grox are also unique in that they will immediately show sympathy towards anyone who breaks the Galactic Code. In order to break the Code, one must use illegal weapons capable of destroying a whole planet. This will irritate any other nearby species, but will satisfy the Grox, unless of course in cases where one uses illegal weapons against Grox planets. Any empire that makes an alliance with the Grox will be forever hated by nearly all the other species, including former allies.

The Grox language is spoken in a high-pitched mechanical voice, the only known exception being their anthem, which is sung in a deep non-robotic voice. The Grox writing is shown on the back of the Dance With The Devil badge, which is given to anyone who allies with them.

All Grox have sophisticated cybernetic implants replacing their right eye, arm and leg, and part of their abdomen.

Perhaps because of their natural sense of superiority, the Grox have named most of their technology after themselves. The city hall at the center of their cities is called "Grox Platz", their houses design is known as "Grox Sweet Grox", they have factories called "Grox Stacks" and entertainment facilities called "Grox-o-Plexx". Their spaceships are known simply as "Grox" and are among the most powerful spacecrafts owned by any spacefaring empire. The Grox also own three kinds of military vehicles: the land-based "Grox Grumbler", the seagoing "Oceanic Grox" and the aircrafts known as "Groxoplanes". Ironically, the Grox do not have a special power, possibly so that they are not totally unbeatable.

Retrieved from "https://aliens.fandom.com/wiki/Grox?oldid=180669"
Community content is available under CC-BY-SA unless otherwise noted.