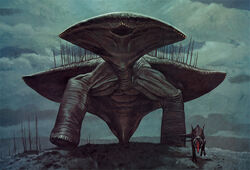 Wayne Barlowe
Grovebacks are one of the largest indigenous species native to Darwin IV. They spend the greater portion of their lives dormant, buried under the loamy soil and often only appearing as strangely regular hummocks surmounted by small strands of shallow-rooted Darwinian trees. They rise only sparingly to wander ponderously from one breeding ground to the next. Once mobile, they balance upon two thick legs and a single rudder-like limb used to balance them that is dragged along behind them, leaving a deep groove in their wake.

Grovebacks possess a 13 meter wide semi-circular head and two enormous nostrils, with several more nostril-like openings covering the tops of their heads. While it is very likely that they have amazingly thick skin due to their enormous girth, they are still susceptible to attacks by fields of Beach Quills, which can bring them crashing down to their deaths. While surfaced, they, like many of the huge "animals" on the planet, depend upon the protein-rich and abundant food stock that is the tiny aerophytes - microflyers that sometimes darken the skies with their uncountable numbers. These aerophytes infrequently will perform periodic expansions of their swarms, which the Groveback's rare emergences coincide with, as it is only during these times that they can easily support such beasts. When the microflyers dissipate, the Grovebacks will rebury themselves for another period of dormancy. Recent studies have suggested that they may in fact switch dietary habits during this time, transforming into lithovores who feed upon the nutrients in the soil through the skin of their underbody, and potentially through the many nostril-like orifices adorning their dorsal sides. Young Grovebacks have three legs, which, like other Darwinian creatures, will be replaced by the rear skid.

Fully matured members of this species are large enough to support entire stands of Darwinian trees, which grow along their backs during their long periods of burial. These saplings form a commensal symbiotic relationship with the Grovebacks, injecting them with sugars while the Grovebacks trade them water in return. This symbiosis is so perfect that advanced scouting drones have been unable to detect the Groveback beneath the ground. The groveback might be a distant cousin to the Keeled Slider since both species of creature walks on two front limbs and balances using a single rutter-like limb.