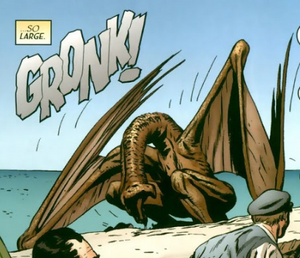 The Gronk resembles a giant gargoyle, a smaller cousin species, found on Arcadia. When it roars, the sound it makes is where it receives its name. A carnivorous beast it swoops down and feeds on small monkeys and even humans.

The Gronks are only found one, a tropical island in the Southern Sea of Arcadia where the Mirandan culture arose worshiping the exiled Lawbringer Miranda Cross. The creatures were actually humans that were horribly transformed by the fallen goddess when they broke her laws.

Retrieved from "https://aliens.fandom.com/wiki/Gronk?oldid=181784"
Community content is available under CC-BY-SA unless otherwise noted.