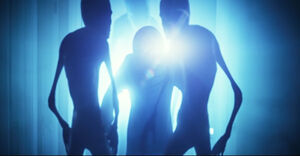 The villains of the 2013 American horror-science fiction film Dark Skies are named "the Greys" by specialist Edwin Pollark.

The Greys are a parasitic, sinister, evil race of aliens that seek to abduct human children for unknown reasons and leaving the children with unknown fates, despite they never come back. Pollark claims that various and paranormal incidents will occur, such as branding their victims and placing strange symbols on the victim's home.

There is no possible way to destroy them, but there is a way to stop them from taking the victim's children; the parents must by hyper-protective over their child and the Greys may eventually give up and move to another home.

The greys are a race of tall beings, rising to nearly seven feet. They resemble very closely to the Grey aliens, though they are notably different for their ominous personality and their infamy for human children abductions.

The Greys first appear one night, when the security alarm goes off in a family's home; the Barretts. Lacy, the mother, goes downstairs and notices half-eaten food on the floor and piles of empty cans forming a symbol on the ceiling. When a child, Sammy, complains that he cannot sleep, he notices the symbol and says that the "Sandman" did it before he went to his room.

The events soon become more dangerous to the family, as they each go into trances and are unable to account for their time. Hundreds of birds crash into the house, and the investigators discover that the birds are from three different flocks migrating from three different directions; as if something was drawing the birds to their home. Finally one night Lacy is wakened by Sammy talking and witnesses a humanoid figure standing over his bed. Horrified, when she turns on the light, the room is empty, and they find Sammy in the front yard. Notably scared for her family, Lacy claims to her husband Daniel that the beings may be aliens, but Daniel refuses to believe her.

One night, Daniel is watching the video cameras, going frame by frame until he sees three dark figures, each standing over the bed of someone in the family. He now believes Lacy's alien theory, and they seek help from a specialist, Edwin Pollark, who refers to the beings 'The Grays'. Pollard informs them that many have dealt with the Grays, with most cases ending in an abduction. Pollard has a wall in his apartment covered in newspaper articles about missing children. Pollard warns the Barrett’s that they should be hyper-protective of their Sammy, who appears to have been "chosen" and that the family must unify in order to save their son. This will make the Grays' activities more difficult and might encourage them to give up and move on.

Daniel buys a shotgun and boards up the windows and doors of the house, and Lacy buys an aggressive guard dog. The family spends Independence Day inside their home eating dinner, recounting earlier holidays to lift the boys' moods. While watching fireworks on the TV, the transmission cuts to static, all the lights begin to flicker and the dog starts barking ferociously at the boarded up front door. Lacy puts Jesse, Sammy's older brother, in his room with Sammy and tells him to protect his brother. She stands guard outside the door with a knife in hand.

Downstairs, Daniel has his gun pointed at the front door as bright lights shine around it. The screws holding the boards in place unscrew on their own, and then all the power in the house cuts out. Once the door falls off its hinges, Daniel fires into the bright light, hoping to hit one of the Grays. He then runs upstairs and gets his family into the master bedroom, and they huddle together on the bed. Lacy sees the Grays standing around the bed and screams and Jesse blacks out. In his trance, Jesse sees his brother in the hallway and approaches him. As his family watches in horror, the Grays appear out of nowhere, surround Jesse, there is flash of light, and he is abducted.

The film ends with the family moving into a apartment. As Lacy is going through Jesse's old things, she finds pictures that Jesse drew as a child, including many drawings of tall grey figures alongside all members of the Barrett family, revealing that Jesse had known about the Grays for some years prior. Suddenly, one of the boys' walkie-talkies starts sounding intermittently from inside a box of toys. Sammy picks up the walkie-talkie to hear, amongst much white noise and static, Jesse's voice screaming his brother's name, indicating that he is alive but sounds apparently harmed and in distress.

Retrieved from "https://aliens.fandom.com/wiki/Grey_(Dark_Skies,_2013)?oldid=188328"
Community content is available under CC-BY-SA unless otherwise noted.