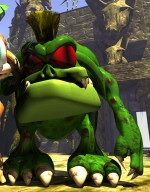 Creatures Universe
A Grendel is a green-skinned, red-eyed species that are known antagonists of the Norns, stealing food and injuring individual Norns. They also carry diseases harmful to Norns.

In the unmodified Creatures 1 and 2, Grendels do not reproduce, being born infertile. Generally, only one Grendel is alive in the world of Albia at a time. In Creatures 3, two Grendels were alive aboard the Shee Ark at most times (both male), but it was possible to get them to breed and have offspring if both were placed in the Gene Splicer machine and used to create a female Grendel.

In all three games, Grendels are automatically produced by a "Mother" machine; in Creatures 3, however, it is possible to ensure that there are no Grendels in the game by killing any existing grendels (e.g. in the airlock) and then waiting by the mother, then placing any eggs into water (Piranha pool) so that they cannot hatch.

The Grendels were another genetically-engineered creation of the Shee, albeit an accidental one. They were certainly not what the Shee were trying to get as a result from their experiments, and were considered to be harmful, useless monsters. However, some of the evil Shee (known as the Banshee) believed the Grendels were genetically superior to the Norns, and kept some for improvement.

Retrieved from "https://aliens.fandom.com/wiki/Grendel?oldid=178276"
Community content is available under CC-BY-SA unless otherwise noted.