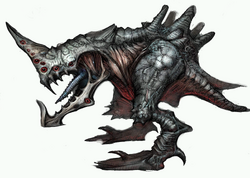 Metroid
Grenchlers are amphibious predators indigenous to the Torvus Bog on the planet Aether, where they lurk in the marshes in constant search of prey. They are fearless creatures, and will spring out from their hiding places to attack anything that moves. Because consumption of other organisms is such an important part of a Grenchler's life, they have evolved the ability to fire potent bursts of energy that can take down nearly any organism, assuming the organism isn't sapient and therefore doesn't possess defensive technologies to protect itself.

A genetic defect that has been passed to all individuals has become their one known weak spot - the shell on their back is susceptible to explosive blasts as it is easily cracked by such a hard impact. This exposes a vulnerable nerve center, which makes them far easier to dispatch with. However, a smart warrior will instead used charged beam technology as it does more damage than missiles and Grenchlers rarely open themselves up for missile attack.

It is rare for a Grenchler to reach adulthood, indicating that they spawn breed to increase chances of survival. Samus Aran only encountered a single adult in her mission to Aether.

There is an obvious similarity between the Grenchlers of Aether and the Sheegoths of Tallon IV. It is not known whether this is due to the species sharing a similar ancestor that was shared between the Chozo and the Luminoth - who were known to share knowledge between one another - or whether this is simply due to the two species filling a similar niche is not yet fully understood.

However, a swap of organisms would explain the many similarities between species found on two or more planets, such as War Wasps as well as the Triclops/Mechlops.