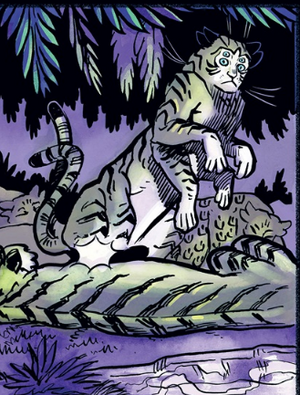 Afar
This is an unnamed species of multi-legged tiger-like beings.

The species bears a resemble to green-furred tigers, save they possess twice as many eyes, ears, limbs and tails.

They appear to live in family units such as clans.

One of their kind, Gremsha, was possessed by the newly Manifest, Boetema, during her second time traveling as a spirit traveler. Boetema found herself in Gremsha's body among her kits. Fleeing the sight of what she thought were monsters, Gremsha's children chased after her to determine what was troubling their mother.

Trapped, Boetema demanded they leave her alone. Her confused children asked fearfully why she was acting strange. Boetema, realizing that her body was not hers, panicked further, until one of Gremsha's kit tried to calm her down. Acting as a confidant and playing along to what she believed her mother was having a delusion she pounced on her parent, declaring her who she was, forcing Boetema out of the alien feline.

Retrieved from "https://aliens.fandom.com/wiki/Gremsha%27s_Species?oldid=182118"
Community content is available under CC-BY-SA unless otherwise noted.