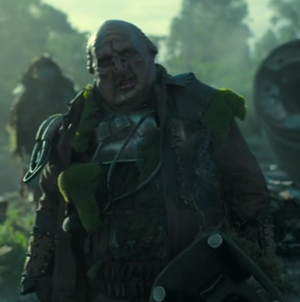 A brown skinned humanoid race with four nostrils and ear flaps on the sides of their heads.

A cannibalistic species, this race prey on visitors to their world. The races that they capture are subjected to a contest in which the Greibosians pit their prey against one another, eating the loser.

Retrieved from "https://aliens.fandom.com/wiki/Greibosian?oldid=185749"
Community content is available under CC-BY-SA unless otherwise noted.