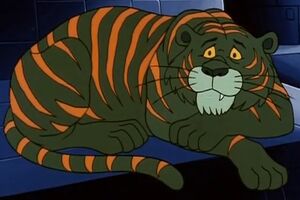 Green Tigers, a.k.a. Eternian Tigers, are a sapient, quadrupedal species of feline-like creatures from the jungles of Eternia. Their capacity for speech has sometimes elicited reactions of surprise, even from Eternian natives, suggesting that the species might not be particularly well-known or common.

Members of this species closely resemble Earth tigers, but can be easily distinguished by their dark green fur with bright orange stripes, as well as their ability to speak. Their diet is mostly carnivorous, although not exclusively, as they've been observed to consume fruit on occasions. They also seem to have a particular fondness for fish.

Retrieved from "https://aliens.fandom.com/wiki/Green_Tiger?oldid=187533"
Community content is available under CC-BY-SA unless otherwise noted.