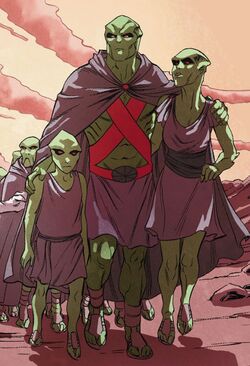 About the same as Humans

DC Comics
Green Martians are an endangered Humanoid race native to the planet Mars. They are superior to Humans in nearly all natural ways and have powers on par or even superior to those of Kryptonians, however they are a peaceful people, only using violence in times of war with their natural enemies, the White Martians.

Green Martians are relatively Humanoid with green skin and glowing red eyes. Their skull is oval-shaped and they have other physiological traits the likes of which are unknown.

Their powers are at their peak while they are in contact with their home-world of Mars and grow more powerful with age.

Fire: They are psychologically and genetically vulnerable to fire and high levels of heat. Consequently, there are especially powerless against a species that can generate their own heat, such as Pyronites.[1]