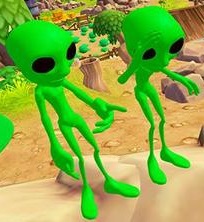 The Green Aliens are an unnamed race of extraterrestrials.

Green Aliens look similar to the commonly depicted Greys or the "Little Green Men". As the name implies, these aliens are green in color, and have a Human-like appearance. They have large heads and large eye sockets, but given the color of their eyes they aren't as visible. While they do have fingered hands, their feet lack any toes.

The Green Aliens are shown as somewhat intelligent, yet docile towards other races as they even show fear towards Humans.

The Green Aliens have been shown to have created space-faring UFOs and spacecrafts, able to travel to different planets because of them. However, they don't appear to have any form of futuristic weaponry, or any weaponry for that matter as they only fight with weak punching.

The Green Aliens were supposed to arrive on their home planet, Mars, but accidentally arrived onto Earth and onto an angry farmer's farmland, and intended to skin the aliens apart, selling their brains to the marketplace.

For the aliens who didn't get captured, they're tasked with freeing their fellow aliens and gathering essentials (spaceship materials and farm crops) for the flight back home.

Retrieved from "https://aliens.fandom.com/wiki/Green_Alien?oldid=187970"
Community content is available under CC-BY-SA unless otherwise noted.