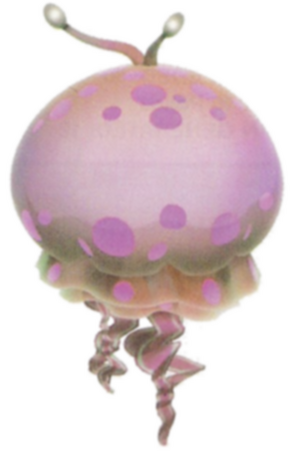 The Greater Spotted Jellyfloat is currently the largest species of Jellyfloat discovered on PNF-404. While it is considered rarer than its smaller cousins, it is alien to some of its found regions, believed to have been brought there by wind currents, and is quickly displacing the Lesser Spotted Jellyfloats in said regions and territories.

Their luminescent organs on top of their bodies act in a similar manor to lures on deep sea fish - luring prey close so it can inhale them inside its bell to digest.

Retrieved from "https://aliens.fandom.com/wiki/Greater_Spotted_Jellyfloat?oldid=181656"
Community content is available under CC-BY-SA unless otherwise noted.